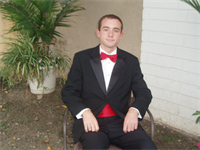 Two zombies are groaning and walking around in the middle of a public park.

Zombie 1: Hey look there?s one! (They start walking that way)

Zombie 2: Man he?s getting away. Look that guy over there?s just standing there! Lets try and get him! (They start off again)

Zombie 1: Aw he noticed us. There he goes.

Zombie 2: Look a girl! They always fall and trip in horror movies! We?re zombies so maybe the same concept applies here! (They head in the direction of the woman. Zombie 1 stops.)

Z1: Oh! Would you look at that! She got away. What a freakin? surprise.

Z1: Don?t flatter yourself. In case you haven?t noticed, you?re a zombie. Not exactly a model boyfriend. Not that that even makes a difference.

Z1: Sure you could?ve. Let me just ask you something. How long have the two of us been zombies?

Z1: And in that time, How many people have the two of us, collectively, bitten?

Z1: Correct. And how many zombies, approximately, preside in this city?

Z1: It makes us the most pathetic zombie invasion in the history of the world! We are the worst zombies ever! Never before has a zombie invasion been so utterly full to the brim with fail!

Z2: Well there hasn?t exactly been that many?

Z1: That?s not the point! The point is: We suck! Most of these people don?t even know that we?re zombies! Most of them think we?re a pair of crazy homeless guys who want to bite everybody!

Z1: What? No! But you see the problem here right? If nobody has even acknowledged the fact that we?re brain-eating monsters, we must be doing something wrong!

Z1: Well, first of all we got to work together. If we just walk around like nitwits we won?t get anything done. But if we put our one and a half brains together, we can figure this out. What we need is strategy. You know, a plan of attack. (thinks for a few seconds) I got it! You see that grocery store over there?

Z1: Everybody needs groceries right? Everybody?s got to have their eggs and their diapers and their inflatable lawn chairs.

Z1: So what if we waited inside the store, next to the automatic doors, hiding just out of sight? We could wait for someone to come waltzing in, and then we make our move and rip their throat out.

Z2: Actually, there might be a problem with that.

Z1: Well of course you?re bad for business! You?re a zombie! We can just bite him if he gives us trouble!

Z2: What are you talking about??.? Oh! No, no, no. I was kicked out looooooong before I was a zombie.

Z2: No! Imagine you?re just walking into the store to buy some toilet paper, minding your own business, and out of nowhere two dudes pop out of the shadows and relieve you of your entrails. How would you feel about that? Sad right?

Z2: Look dude, I never wanted to be a zombie. Before this, I was an actor, heading straight for the big time!

Z1: I didn?t want to be a zombie either! But you had to go sneaking up on me anyway! But am I complaining? No! I have more reason to be complaining than probably anyone else in the world! I?m a zombie and I?m stuck with an idiot! (he sits down. There is a long pause and neither of them talks for a while)

Z2(finally): So what were you before you were a zombie?

Z2: What?s wrong with that?

Z2: Of course not. What kind of friend would I be if I thought you were lame?

Z2: Why don?t you show me some moves?

Z1: Well I?m not really prepared?(pulls a stereo seemingly out of nowhere and turns it on. Starts letting his body be taken over by the power of music)

Z1: (turns off the music) I knew you would laugh at me! You jerk!

Z2: I?m sorry but I just can?t take you seriously. Well this has been fun, but I think I got what I needed.

Z1: What are you talking about?

Z1: What do you mean you?re done? You can?t just quit being a zombie. Unless you found some sort of antidote or something.

Z1: I?ve been walking around trying to bite people for seven weeks with you and now you?re telling me I wasn?t even infected?

Z2: I?m told you I?m an actor! (wipes of some makeup) I?m playing a zombie in a movie and was preparing for my role.

Z2: I didn?t get this part for my looks. I really, really get into character before I start performing.

Z1: I can?t believe this. My wife?s probably worried sick! God I feel stupid. How could this be happening? Wait, If I?m not a zombie, how come I could only limp before? And how come I had a desire for human flesh?

Z2: I think they call it self-hypnosis. You?re so convinced that you?re something that your body believes it and acts accordingly. Of course, I don?t really know you that well. The human flesh thing might just be you. You could be a cannibal. But I don?t judge.

Z1: Well right now I just want a burger. And, of course, to punch you in the face.

Z2: Hey, you know what? You?d make a great zombie in this movie. You get more in character than I do. And, now that I think about it, I do believe it?s a musical. You could really put your dancing skills to the test.

Z2: Heck yeah! We start shooting in a few weeks. I think I can convince the producer to squeeze you in to the cast. He?s my uncle.

Z2: Even if aren?t that good a dancer, it?s better than nothing.

Z1: I?m just going to pretend you didn?t say that. (thinks about it) Well I?ve thought about it and I think I?ll take you up on that deal. Imagine the surprise on my wife?s face when I tell her!

Z2: That?s the spirit! I?ll call my uncle right now! Together we can make the best zombie musical in the history of the mankind!

It's a short skit about two zombies trying to find their place in this world. It has not been published so feel free to use this script for an amateur performance, audition, etc.

To obtain the author's permission (if needed), you may send a private message to Jalvarez42 directly from the author's profile page (Sign In / Sign Up required).

You are encouraged to Post Your Video/Audio Production that is based on this script!

Submitted by Jalvarez42 on Wed, 05/11/2011 - 14:10
yeah, no problem. I tried to right it so that the characters genders could go both ways.
Submitted by Jerry J. (not verified) on Wed, 05/25/2011 - 16:27
I would absolutely love to do an audio recording of this script and try to get some guys I know to animate it! Would you mind? I would most obviously give you all credit for this wonderful script.

Submitted by RainbowBunnies on Tue, 08/23/2011 - 16:52
Hello [: I really loved this skit :D It's really funny. and I went on youtube to see if anyone did this skit. well, i found this: http://www.youtube.com/watch?v=i0TQGWrmKzA it says someone elses name wrote it. and it's almost the same as this skit. So, i don't know what's up, but I think you should get some credit 0.0 Anyway, awesome job with the skit [: REALLY liked it!!!

Submitted by Jalvarez42 on Wed, 02/01/2012 - 10:36
Hey there, icomedytv-goers! I just wanted to say how flattered I am that so many people like my script. I apologize in advance if I start not responding to requests to use it. I have a full load this semester and I will be absolutely swamped with work for the majority of it. Just a reminder, you MAY USE this script WITHOUT MY PERMISSION. It makes it easier for the both of us plus I get free publicity. Thanks guys. Merry Monologuing!
Submitted by lindagirlcom on Thu, 04/12/2012 - 11:20
hey um mm amazing script way funny wondering if id be able to use this for my high school drama class?? please and thank yous all credits to Jermey Alveras
Submitted by Person (not verified) on Wed, 08/01/2012 - 14:04
THIS SKIT IS EPIC!!! GREAT JOB!!! (: (: (:

1 How Do You Find An Audience?
2 Observing Comedians Observations
3 Writers Block
4 After Losing Hope: True Heroes Of The Enterta...
5 Louis C.K. In Trouble
6 Stand up Downfalls
7 Living to Perform, Wanting Desperately to Per...
8 I Don't Get Swearing as Being Funny
9 Getting Past Getting Stuck
10 The Newbie
END_OF_DOCUMENT_TOKEN_TO_BE_REPLACED