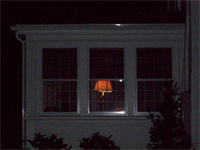 (Courtroom.  The judge is sitting with gavel in hand looking about sternly.  The defense attorney is standing looking away from the judge deep in thought.)

Judge:  Silence.  I will have complete silence in my courtroom.  Will the defense, please call your next witness.

Lawyer: Thank you.  Mr. Armstrong as you certainly must know, my client Dr. Alfred Bellows is accused of killing his wife Amanda Bellows.  Please tell us how you knew Mrs. Bellows

Neil:       I worked with Dr. Bellows so naturally I saw Mrs. Bellows at NASA luncheon?s and other company events. I had dinner with the Bellows on more than one occasion.

Lawyer:  So you wouldn?t say that you and Mrs. Bellows were more than casual acquaintances.

Lawyer: You spent the entire evening from 9:00pm to 11:30pm central time there?  Please answer the question carefully.

Judge:    Please Mr. Armstrong, just answer the questions.  I hope you are going somewhere with this.

Lawyer: Yes, my contention sir, is that Mrs. Bellows was not murdered by her loving husband Dr. Alfred Bellows.  She was killed by this man, Mr. Neil Armstrong.

Lawyer: And how very convenient that is for you.  How very perfect.  Too perfect Mr. Armstrong!  Oh he couldn?t have killed her, no he was off gallivanting on the surface of the moon.  He?s a moon man.  Next time, and there won?t be a next time if I can help it, next time plan a less ostentatious alibi.  When I was watching the moon landing, I had my suspicions.  I said to myself, ?that man is hiding something.?  I was then coincidentally attacked by a man hiding behind my television set. (Silence, then reading) ?Neil was acting very nervous the night of July 29, 1969.?  This is from the log of one Buzz Aldrin.  You do know him, don?t you?

Lawyer: He says you spent a considerable amount of time that night outside the eagle.  Is that true?

Lawyer: Oh, I see.  Did Buzz go with you, wait let me read. ?Neil said he was feeling cooped up, he said he had to go out for a couple of hours to clear his head.  He said it was about a girl.  I don?t remember her name.  I asked him if he wanted company?he said no this was something he had to do himself.  I didn?t see him for another three or four hours.  It was after midnight when he got back.  He looked exhausted.?  You looked exhausted, you were gone for three or four hours, the lunar buggy was running on fumes when you got back.  Where were you Mr. Armstrong?

Lawyer: Yes I do know.  I know better than most.  Do you know what they used to say in my neighborhood when I was a little boy?  Never trust an astronaut.  It didn?t make a whole lot of sense in the nineteen thirties but it does now! (Pulling small pieces of paper out of his pocket) Receipts!  $700,000.00 in cab receipts found in you house.

Lawyer: You just happen to disappear for three or four hours while a woman you have ties to is mysteriously murdered, and your buddy Buzz says you were acting weird and nervous all night.  Mr. Armstrong, I have just one question, you killed her didn?t you!

Neil:       I killed her, I couldn?t help it.  I have this beautiful Genie who lives with me.  She drives me nuts.  She won?t leave me alone.  I was on the moon minding my own business when she popped up and asked me to come home for supper, she says the Bellows are coming over for dinner.  I stupidly said, and I was kidding mind you, ?Genie I?m kind of busy why don?t we have the Boudreau?s here and poof!  Before I could say anything else who should show up on the surface of the moon but Mrs. Bellows.  I got her back, I had genie send all 3 of us back but it was too late.  Mrs. Bellows was dead.  Her tongue was as big as a football.

Lawyer: What did you do then?

Neil:       We took Mr. Bellows' bowling ball and beat Mrs. Bellows' lifeless corpse for a few minutes to establish a murder weapon then Genie transported me back to the moon.

Judge:  Why did you feel you had to establish a murder weapon?

Neil:       Good question judge.  Genie is always accidentally killing people, like when I asked what the inside of John F. Kennedy?s head looked like back in ?63.  We chose the bowling ball because I really can?t stand Dr. Bellows, he?s always almost finding Genie. Frankly I find his antics annoying.  Plus I owe him money.  You know I never thought I would get caught

Lawyer: Your perfect alibi was too perfect, and you?ll pay Neil, with your life.  God Damn filthy astronauts, they?re all the same.  Mom always said you can?t trust them.  Take him away boys. (Genie appears)

Genie:    Do you want me to help you master?

Neil:       No?Yes! Why not?  And make me wealthy beyond all measure!  Never trust an astronaut Mr. Attorney.  You should have listened to your mother.  Genie we?ll repopulate the world with living puppets, yes, that?s it!  Puppets!  Marionettes, sock puppets, paper bag puppets?driving to work, making love, doing taxes, a world of puppets!  And it will all be mine!  Genie quick take off my shoes, I must suck my sweet astro toes this instant! (Lawyer steps forward and shoots Neil.  He is dying.  Lawyer drops the gun.) .  Remember, all of you, there will always be more of us, you will never destroy the Society of the Astronauts, kill me and ten more will rise up to take my place.  Perfect men with amazing flat tops and the ability to speak to the dead.  Men with large ego?s, immaculate criminal records, and amazing credit ratings. (He dies)

Lawyer:  God damn astronauts.  Thank God that?s over.  Right judge.  Judge? (He looks over, the judge is dead, then his hand with a sock puppet on it pops up.)

Read it. Let me know what you think.

Contact the author before using this material in any way.
~dtrue80

To obtain the author's permission (if needed), you may send a private message to dtrue80 directly from the author's profile page (Sign In / Sign Up required).

1 Louis C.K. In Trouble
2 How Do You Find An Audience?
3 Writers Block
4 After My First Script
5 Observing Comedians Observations
6 My Comedic-Writing Epiphany: Spotting The Ext...
7 The Newbie
8 Setting Goals
9 After Losing Hope: True Heroes Of The Enterta...
10 I Don't Get Swearing as Being Funny
END_OF_DOCUMENT_TOKEN_TO_BE_REPLACED