The Man Who Wrote That Letter 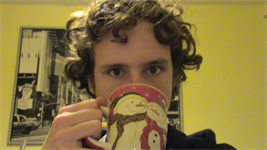 The Man Who Wrote That Letter

Personally, I think this is useless, why the hell would anyone waste their time doing this?

I could be doing so, so many things right now! Playing Xbox, watching TV… err, what else? … Ah! Socialising! Getting laid! And stuff.

Open the damn door! I said OPEN the DAMN DOOR!

What’s the time? The time… the time… grrr, of all the days in the world I could’ve been kidnapped by my own damn friends, locked in here, TODAY my Hamilton stops working. For the LOVE of GOD! It IS American, it shouldn’t have problems like that, I mean…

Andrew left the damn window open, and, and it’s the middle of December! Not to mention the fact that the stupid heater is freaking broken. Seriously, Andrew, sort your life out and get the damn heater fixed! If there’s one thing I’m going to write here it will most certainly be for you to fix this stupid damn thing!

And what’s UP with this weird vase? Why is there a bird on it? Such a, girly, useless decoration, it doesn’t even have anything inside… hmm… Oh crap!

I guess they mean well… Don’t get me wrong, they’re all bastards either way, but Jim said it was “quite a laugh,” when he wrote it for his future-self when he was 15. 15! I’m 29! But that’s not the point! I’m just… too old for this stuff. I mean… Sure when you’re that age you have your dreams and hopes and a will to accomplish them. But mine went either down the gutter or are already reality. I mean, look at me, look at this legendary suit. I remember the first time I saw this magnificent fabric miracle. Ah… absolutely amazing. It was the second best feeling I ever had! The first being sex of course. Afterwards, though, I looked at the price tag and hah! For the moment there I literally died inside. Seriously though, a little bit of Desmond Relison died that day. I could never get it back.

I guess it was for the best, if it wasn’t for that, I never would’ve been who I am now. Only 29 and has already scored seven girls in seven nights… the perfect week, a sixty-nine, twins, really hot conjoined twins and a sixty nine with hot twins, a three-some with a blonde and a brunette AND a job that pays 20000 bucks a month. Me, Sir Relison, the perfect example of the perfect man! Living the perfect life! Single and loving it. Loving Loving LOVING it! For ever and ever and… forever… Yeah… loving it.

There’s just nothing to write about. What would my future self want to make sure to remember when he’s older but still looking good? Err, I guess I should write down that it ISN’T a good idea to try to pick up chicks in lesbian bars. Hah! Half the time most of them aren’t even lesbians! They just, like to “experiment”. They’re lucky because they can “experiment”! If a chick kisses another chick then it’s fine, it’s “experimenting”, but most of all it’s HOT! If a guy does that to the other guy then… ugh! Wah! Eak! Don’t even want to think about it. It’s just, gay and stuff. Don’t get me wrong it’s ok to be gay. I just don’t want to have anything to do with them. I mean apparently they are nice people but that’s what they all say, “They’re just going to be friends, don’t worry about it, it’s just dinner!” Next thing you know you wake up in his house, wearing thongs in bed while he sits next to you smoking a cigar. That’s how my cousin went. Never been the same since. It’s sad really, they started a family now. Yep, have two kids. Adopted. obviously. I personally wouldn’t want to adopt, not really.

But that’s only because I wouldn’t have kids in the first place! Haha! What use do they have anyway? When they can’t sleep they cry, when they can’t eat they cry, if you give them food, they poop and then go to sleep! A living nightmare!

But I guess if I were to settle down, then it would most likely be with someone I already know, and am friends with. Cheesy I know. But Lucy, she’s, well she’s something special. I remember the first night we, you know… did it. It was epic. Best night I ever spent with a girl ever. And the morning, not having to wake up at 4 am to make sure I’m out of hers before she wakes up, and waking up to the fresh smell of coffee and waffles with strawberry jam. It, it sure was amazing.

She’s with, she’s with Jim now. Completely forgot about me. Just last week I bumped into her on the sidewalk, next to KFC. I was actually on my way there, about to order one of those lovely juicy chicken wings everyone is making a big fuss about. She said hi, asked how I was. “I’m fine,” I said. I mean, isn’t that what everyone says anyway? She remembered that she was late to work. Old-school excuse, I guess it saves us the awkward silence though. So that’s good. But it was nice to see her move on. It’s good she’s moved on. I mean it was two weeks since… well since that happened.

Ah! Who needs a relationship anyway?! You meet someone; you take them to dinner, and in order to get any sort of action what SO ever you need to make her have a “good” time and pay for the night out. Seriously, it would be so much easier just to order a hooker! Still have to pay, but there is no need for any talking!

I mean seriously, with relationships, that’s pretty much what happens. You find someone, then you have an awesome few weeks together and bam! She finds a better guy. But this guy isn’t even wearing a suit! He’s my friend…

Life isn’t pretty. It never was. It never will be. One day you think you’ve found the “one,” but sooner or later that all goes away. And pray to god that you’re not too late realizing what a mistake you’ve made after you stupidly decided to marry her. She’ll KICK you out, TAKE your DIGNITY and SHOVE IT RIGHT UP YOUR…

Well, I guess there is no way of avoiding this problem, I mean I’m stuck here in this cramped bathroom and my bastard friends won’t let me out until I write this damn stupid letter. There’s just no other way of resolving this, is there? But what can I write? Now that I seriously consider it, there’s just nothing to write about… I mean, I guess I could write about how awesome my life is.

But, that would be a lie. All my life I’ve been running away from the truth… It’s a blank piece of paper. And I think my pen ran out of ink… but it looks nice. That’s only why I got it…

This is my first monologue. This is a monologue without stage directions.

To obtain the author's permission (if needed), you may send a private message to 260Studios directly from the author's profile page (Sign In / Sign Up required).

Unknown Comedy Monologues - The Man Who Wrote That Letter

1 Louis C.K. In Trouble
2 How Do You Find An Audience?
3 Writers Block
4 After My First Script
5 Observing Comedians Observations
6 My Comedic-Writing Epiphany: Spotting The Ext...
7 Setting Goals
8 After Losing Hope: True Heroes Of The Enterta...
9 The Newbie
10 Funny Is In The Eye Of The Beholder
END_OF_DOCUMENT_TOKEN_TO_BE_REPLACED