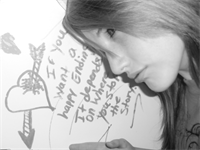 There are so many weird things that happen in my life. I don't know why....but almost everyday, some creepy thing happens to me! It's like fate is picking on me, or maybe karma for all those times I laughed at people who fell down or got hit by something. Example: Yesterday, while driving down the road (this happened 3 times in the same day), at a stop light...I get this feeling that someone is staring me down! (you've gotta know that feeling) anywho, i look over and I see this fat, bald man with a five Oclock shadow and he had some teeth missing....I noticed that because he smiled this creepy smile and winked at me. Ummm barf...

The second time wasn't as bad, it was a woman. I swear she was judging my awesome singing and what I call "sofa dancing" That's where you're dancing while sitting down. Yet again I get that feeling...I look over and see her...her jaw is all dropped and her eyes were all bugged out...I was thinking...yeah lady, that's right! You only get to see this. Then I made that tsss sound in my mind. I swear, I could see a little drool dripping out the side of her mouth. Thank God the light turned green, cuz she started to roll down her window.

Now, the third time was beyond awkward....you know how from far away some people can look extremely hot, but up close they're drop dead ugly!? Well, that happened to me....and trust me....it's not a good idea to window flirt. the guy I saw pass me in the car looked like Zac Efron mixed with Brad Pitt haha I thought it was my lucky day. Then at the stop light...What I thought was great hair happened to be a hat, covering the zitty face of a teenager. I was tempted to get out of my car, get him to roll down his window, and then i'd pull that hat down over his whole face and say.....ahh much better :) (but i'm not that mean)

Now, let's talk video games..... I hate that awkward moment when you think you've been doing super sick at mario cart and then you realize you've been looking at the wrong screen the whole time.

I love it when my boyfriend is playing Gears of War 3 or Halo. He sucks....the part I love is when he asks me for a sandwich and I sarcastically reply. "Babe, you've got hands...fix it yourself." then I grab the controller and say...now this is how it's done :) I can beat him at his video games, but he's got me beat at wrestiling and twister. (That's only because I don't want him to losethe manliness he's so prideful of) ;)

Ever had an awkward day? I sure have!

To obtain the author's permission (if needed), you may send a private message to Skyler McKinnon directly from the author's profile page (Sign In / Sign Up required).

1 How Do You Find An Audience?
2 Writers Block
3 Stand up Downfalls
4 Louis C.K. In Trouble
5 Observing Comedians Observations
6 The Art of Comedy?
7 After My First Script
8 Becoming Comfortable in Front of a Crowd
9 Getting Past Getting Stuck
10 The Newbie
END_OF_DOCUMENT_TOKEN_TO_BE_REPLACED