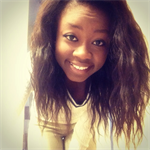 Tisha: Welcome to King Burger. May i take your order?
Guy: Yea. I want three double stacked bacon cheese burgers, two large fries and one large Doctor Pepper?
Tisha: How many people are in the car?
Guy:(looks confused) Ummmm... Just me.
Tisha: Yea; i see it in the camera. I'm not blind. If i may ask how many people are you ordering that for?
Guy: Just me.
Tisha: So you're telling me that you alone is going to eat three double stacked bacon cheese burger; two large fries and a large soda; is that what you are trying to tell me.
Guy: Ummmm...Yes.
Tisha: Pull your fat ass to the front to get your order.
(Guy pulls up to the front.)
Tisha: Damn you're big!
Guy: Excuse me, mum?
Tisha: I ain't your mother. I don't think an elephant can come out of a rabbit.
Guy: What are you trying to say?
Tisha: (sarcastically) Oh man. I canceled your order.
Guy: No problem. Three double --
(Tisha's phone rings)
Tisha: Hold on my baby is calling. (Picks up phone). Hey baby. I'm at work. Nah, I'm not busy. Go ahead. Really?
Guy: I don't think That is a good work ethic.
Tisha: I don't think you eating all that food is a good eating ethic. Excuse me? Don't interrupt me when I'm talking to my baby. (back to phone) It's no one. Just a fat slob messing with me. Nah you don't gotta fight him. He'll just sit on you and your lungs will like gush out. I don't want to lose you, baby.
Guy: Umm... I think I'll like to order now.
Tisha: Hold on baby. (to person) What's the order?
Guy: Its.
Tisha: Shut up. I know it.
Guy: so why would --
Tisha: Shut up...Your diabetes order is being made. (yells to the back) Emergency. Emergency. There's a fat guy here who needs his order ASAP or else he's swallowing us all! Y'all better hurry up!
Guy: I can hear you...just now and when you were talking on the phone.
Tisha: I know.
Guy: So?...
Tisha: What? You want an apology. I'm sorry you have such a sad life that all you do is eat and live with your mum who picks up your rolls to give you a shower. Will you forgive me?
Guy: I think it's been a while. Can I get my order?
Tisha: (laughs) Damn, Pillsbury dough man. Can't you wait? You have enough fat in you to sustain you for a couple of minutes.
Some worker from back: Here Tisha.
Tisha: Thank you. I was starting to think he was going to eat me if he didn't get his food. (turns to fat guy) Here you go. Your order, your receipt and the number to Jenny Craig. Make it useful and if it doesn't work jump of a bridge and kill yourself. No one will miss you. Not even your mother. She's tired of lifting those stinky rolls. (smiles at him) Move along.

mention my name if you do it. thanks

Free for all.
~adwoa

To obtain the author's permission (if needed), you may send a private message to adwoa directly from the author's profile page (Sign In / Sign Up required).

1 How Do You Find An Audience?
2 Louis C.K. In Trouble
3 The Lime Light Of Comedy?
4 Observing Comedians Observations
5 Writers Block
6 Setting Goals
7 Living to Perform, Wanting Desperately to Per...
8 The Art of Comedy?
9 After My First Script
10 My Comedic-Writing Epiphany: Spotting The Ext...
END_OF_DOCUMENT_TOKEN_TO_BE_REPLACED