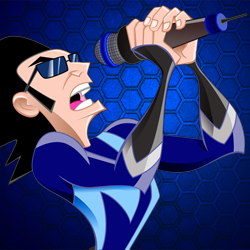 He shakes up the entertainment industry with hishilarious original tracks like Barfed in My Backpack, Big Boobed Babysitter, Clowns From Uranus and Who Took A Dump in My Lunchbox?

Maury, a rock ?n roll composer and clerk at Moronic Music is dismayed by the homogenized, overly sincere, faux-sensitive artists being produced and marketed by the Hollywood talent machine that seems determined to suck forever.

Every band seems to look, and every song seems to sound, well...exactly the same!

Maury yearns to bring his music to the masses, but with the iTunes Store adding 15,000 new tracks a week and every clown with a Mac and Garageband recording endless amounts of lame and derivative garbage, how is an unknown musical genius going to ever make it in this screwed up business?

One day Maury discovers a military grade microphone down in the basement of the store and transforms into Moronica: The Duke of Decibels, The Guru of Grunge, The Messiah of Metal!

In a micro-second all his dreams are now realized, for there is no power greater than a loud mouth with a mic, and as Moronica no one can stop him from ascending to the very top of the Mock ?n Roll Hall of Shame.

He quickly selects his geeky and flatulent guitar tech co-worker Rodney Rump Roast to be his super hero side kick and appropriately names him Sphincter Boy. Rodney sets out to design the most dangerous musical instruments ever invented, including the Bone Crusher?, an extremely destructive trombone rocket launcher!

Since no serious band would be without roadies to insult and
order around, Moronica enlists The McSchleppster Triplets (Stinky, Sticky and Stubby) into hauling around their equipment to every corner of the city as they film over the top music videos and perform illegal, impromptu concerts all across the streets of SoCal.

Along with his sexy and smart twin sister girlfriends Double D. (Delicious and Delectible), Moronica, Sphincter Boy and the band set out to force their unique brand of hard rock comedy onto the jaded and talent starved citizens of L.A.

On his trek to rock ?n roll immortality, Moronica dispenses his unique form of street justice to anyone who gets in his way as rabid groupies and unruly fans chase him all over the city and try to rip him to pieces...

I'm an entertainer, comedian, writer, composer and animator from SF and the creator of MORONICA: HARD ROCK HYPER HERO. I hope you enjoy my pitch and if you have any questions please let me know. Thank you. Mark O'Hara

To obtain the author's permission (if needed), you may send a private message to moronica directly from the author's profile page (Sign In / Sign Up required).

Submitted by zara on Wed, 03/14/2012 - 21:09
Hi Mark, I really like your pitch and the concept of Moronica. I am quite interested in producing the short. Please do let me know if you might be interested in getting the short produced. I look forward to hearing from you soon. Thanks Zara

Submitted by moronica on Thu, 03/15/2012 - 02:26
Hi Zara - Glad you enjoyed my pitch - what is your email address? Here's the link to Moronica: http:moronica.net My email is info@skipnosis.com Mark O'Hara

1 How Do You Find An Audience?
2 Louis C.K. In Trouble
3 Writers Block
4 Observing Comedians Observations
5 After My First Script
6 Funny Is In The Eye Of The Beholder
7 My Comedic-Writing Epiphany: Spotting The Ext...
8 The Art of Comedy?
9 After Losing Hope: True Heroes Of The Enterta...
10 Setting Goals
END_OF_DOCUMENT_TOKEN_TO_BE_REPLACED