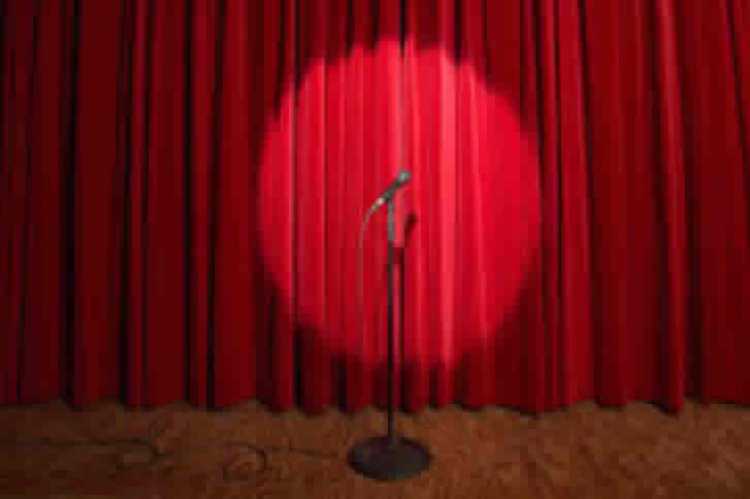 I’ve always enjoyed comedy. Back in my teens I used to collect the albums of comedians like Bill Cosby and later George Carlin. But I especially got turned on to the Monty Python comedy group. They’re random turns in topic and crazy dry sense of humour appealed to me. I think my very first stand up comedy routine happened in my grad 11 high school class. The teacher left the class suddenly to tend to something at the office. The class sat there for a minute silently working on their assignments. Then this crazy idea came into my head. I had listened to this Monty Python record, of skits from their show, so much; I knew some of it by heart. So I reacted to this crazy idea and jumped up in front of the class and spouted off this skit in a poor English accent, then sat down before the teacher had a chance to return. I was told months later I would always be remembered in school for that event. I never did anything like that again but always wanted to become comfortable speaking in front of a crowd. I think it was because I watched my dad make speeches occasionally and it made me want to be like him. So when my wife talked about joining Toastmasters, the public speaking club, I was all for it. So we joined together as a fun thing to do almost like another kind of date night. We’d compete on a small level to see who did the best but always were really supportive of each other. Then I had brain surgery. Yes brain surgery. It was to correct a lifelong epileptic condition that after 20 years of being under control was revisiting my life at age 49. The brain surgery corrected my epilepsy but changed something dramatically. I used to be sort of absent minded, was forgetful and had a hard time staying focused in my thinking. Now, after surgery I was suddenly very clear in my thinking. Thought processing twice as fast as I used to and I had a memory that I never used to have. I emailed with my friends and my observations to the surgeon, 7 days after surgery I used this analogy to describe my sense of how I was feeling; “I feel like I could be in an improv comedy group, I’m thinking that fast”. Little did I know I was speaking prophetically. My sense of humour was already in high gear. With my return from Brain Surgery my friends and neighbours didn’t know what to think and I knew that. So I was having a riot of a time acting like the surgery had not gone well. Pretending not to know who they were, introducing myself to the “new neighbour” (who I lived next to for 5 years and really knew me well). Anyway about a year after the surgery I was now functioning in this new brain power. I had always been good communicating in text; writing letters, proposals and that sort of thing. So I just played around one evening with writing some comedy monologues and it just seemed to come out of me. After writing a few, I thought I might really like this and imagined I was writing for some other comedian. But my wife said I should perform this and not give it to someone else. So began the next step toward my life becoming a comedian. For Christmas 2009 my wife gave me a paid entrance into an improv class and I just finished that class in June of 2010. The class concluded with a show for any friends and family of the class. We managed a full house for the show and it was really fun. I wasn’t scared, but that I think, was mostly due to the teacher MCing the show which really made it easy to just act. Then my next goal was to do my monologue material in stand up. I had tried a local open mic club trying out my material but my problem was I found the venue had a show that was too raw for any of my friends to come and see. So I did my first stand up show to a woman’s event that was 80 women getting together for an event with some live music and I did my 10 minute spot in the middle of that. It went really well, I had a fellow comedian video me and the comments were really encouraging. I practiced lots but still forgot to say large chunks of the material. But that was OK I had 17 minutes of material and that would have gone a little too long anyway so it worked out good. Now I’m juiced to keep on track to know my material even better and look for the next opportunity to speak.

1 How Do You Find An Audience?
2 Writers Block
3 Observing Comedians Observations
4 After Losing Hope: True Heroes Of The Enterta...
5 Living to Perform, Wanting Desperately to Per...
6 Stand up Downfalls
7 I Don't Get Swearing as Being Funny
8 Louis C.K. In Trouble
9 Getting Past Getting Stuck
10 The Newbie
END_OF_DOCUMENT_TOKEN_TO_BE_REPLACED