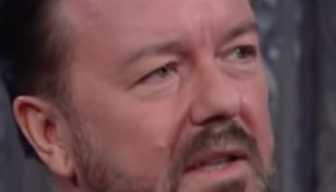 Ricky Gervais is an English actor, comedian, author, director, producer and former pop musician. Gervais achieved mainstream fame with his ground-breaking television series The Office and the subsequent series Extras, both of which he co-wrote and co-directed with friend and collaborator, Stephen Merchant. Besides writing and directing the shows, Gervais also played the lead roles of David Brent in The Office and Andy Millman in Extras. Gervais has also appeared in several Hollywood films, including For Your Consideration, Stardust, Night at the Museum and Ghost Town, in which he assumes the leading role.

Gervais has performed on three sell-out stand-up comedy tours, wrote the best-selling Flanimals book series, and starred with Merchant and Karl Pilkington in his podcast The Ricky Gervais Show. He has accumulated a multitude of awards and honours throughout his career, including seven BAFTA Awards, four British Comedy Awards, three Golden Globe Awards, two Emmy Awards and the 2006 Rose d'Or, as well as a Screen Actors Guild Award nomination.

Gervais made a few attempts at stand-up in the late 1990s, but his first successful show took place at the Cafe Royal, as part of 2001's Edinburgh Fringe. Titled Rubbernecker, the show also featured Jimmy Carr, Robin Ince and Stephen Merchant.

Gervais later toured the UK in 2003 with his stand-up show Animals. The Politics tour followed a year later. Both of these shows were recorded for release on DVD and television broadcast. The third part of the themed live trilogy, Fame, took place in 2007. It started in Glasgow in January and ended in Sheffield in April. Blackpool reported selling out of tickets within 45 minutes of them going on sale. More dates were added.

Newsnight Review's panel saw Animals during its Bloomsbury run and covered it in January 2003. They were not favourable, with Private Eye editor Ian Hislop being the most explicit in his criticism. After this, Gervais closed each show by calling Hislop an "ugly little pug-faced cunt." Further coverage on Newsnight Review has been overwhelmingly favourable, with the panelists playing 'themselves' in promos for the second series of Extras. Panel regulars Germaine Greer, Mark Kermode and Mark Lawson also appeared as 'themselves' reviewing When The Whistle Blows in a series episode. Critic Lawson is a great admirer of Gervais and Merchant, having interviewed them extensively for television, print Front Row and the Edinburgh International Television Festival.

Fame was the subject of some controversy in January 2007 when Gervais told a story, ostensibly about how people will do anything to become famous, to a Scottish audience. The story referred to a question asked of Gervais five years earlier by a reporter: what can you do to become famous? To which he replied, "Go out and kill a prostitute." He followed up with the punchline, "I won't do that bit in Ipswich," referring to the December 2006 murders of five prostitutes in Ipswich. The joke even drew criticism from the father of one of the victims, Tania Nicol: "These days they want to make a joke out of anything. I feel he’s just being uncaring, quite honestly." Gervais did not apologise, but did attempt to defend himself: "I do want people to know that that happened five years ago and is not related to anything now. That is the problem with comedy, a joke that is funny today can be a terrible faux pas tomorrow."